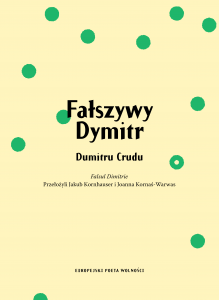 Dumitru Crudu’s poetry project is a modern idyll, or rather a dream about such an idyll with her – a muse, a lover, or sometimes an erotic toy – playing the leading role. Nothing seems to happen in this poetry – its protagonist is contemplating cockroaches and butterflies, tending pigs and… writing poems about this – but this apparent absence of action deeply resonates with loneliness and the need to be close to another human being. Dimitrie – the author’s alter ego or his distorted reflection – is sketched with a primitivistic line, he needs little to be happy. Having read several dozens of poems about Dimitrie who maunders down the empty rooms of his life, we dearly have enough of him, and yet our irritation goes hand in hand with admiration and jealousy – as what sort of courage does it take to do nothing and boast about it? It is worth making friends with Dimitrie – an antihero in the times when pragmatism is the paramount value.

Dumitru Crudu (b. 1967) – a Moldovan poet, prose writer, playwright, literary critic, and author of children’s books, who writes in the Romanian language. He was born near Ungheni, studied in Kishinev, Tbilisi, from where he escaped from civil war at the beginning of the 1990s, and then in Brașov and Sibiu. He lives in Kishinev. He made his debut with the book of poetry Falsul Dimitrie in 1994. Since then, Dumitru Crudu has published almost thirty books: poetry, novels, and dramas, for which he has received many literary awards in Moldova, Romania, and other countries. He recently published a collection of prose works Moartea unei veveriţe (2017). His works have been translated into a dozen or so languages (never before into Polish). In 1998, he co-created the trend in poetry referred to as fracturism, which called for describing daily life, non-conformism, and mistrust towards literary fashions and conventions. Falsul Dimitrie (False Dimitrie) is the author’s own anthology of his poetry, containing poems from his five books, as well as juvenile, dispersed, and previously unpublished works, which was issued in 2014.

Jakub Kornhauser (b. 1984) – a literary scholar, poet, essayist, translator, literary critic, and editor. Co-founder and employee of the Centre for Avant-garde Studies operating by the Polish Philology Faculty, Jagiellonian University, and assistant professor at the Philology Faculty at the same university. Jakub Kornhauser deals with the theory and history of avant-garde, and Polish, French, and Romanian poetry. He translates from French, Romanian, and Serbian; his editorial works include the book Głuchy brudnopis. Antologia manifestów awangard Europy Środkowej (Deaf Rough copy. An Anthology of the Manifestos of Central European Avant-gardes; 2014). In 2017, his translations of Gherasim Luca’s prose and Miroljub Todorovic’s poetry were published. He cooperates with the Museum of Modern Art in Cracow and is a columnist of the Gazeta Wyborcza daily, as well as an editor of the awangarda/rewizje series published by the Wydawnictwo UJ. He is also the author and editor of a dozen or so books. He recently published a monography Awangarda. Strajki, zakłócenia, deformacje (Avant-garde. Strikes, Disturbances, Deformations, 2017). In 2015, Jakub Kornhauser was awarded the Wisława Szymborska poetry award for his book of prose poems Drożdżownia. His works have been translated into a dozen or so languages. He was born in Cracow, where he still lives.

A translator and lecturer of the Romanian language, Joanna Kornaś-Warwas graduated from Romanian philology at Jagiellonian University. She has a passion for translating literature and is the author of translations of works by some of the most valued Romanian writers, including Max Blecher, Mircea Cărtărescu, Dan Lungu, Ioan Es. Pop, and Varujan Vosganian. She is a laureate of the City of Gdansk Literary Award European Poet of Freedom for her translation of Ana Blandiana’s book of poetry Patria Mea A4 (2016) as well as the Literary Award of Central Europe Angelus for her translation of Varujan Vosganian’s Cartea soaptelor (Book of Whispers, 2016). In 2017, the Romanian cultural and literary magazine Observator cultural honoured her with the Award for Translator in recognition of her outstanding achievements in the translation of Romanian literature into another language.