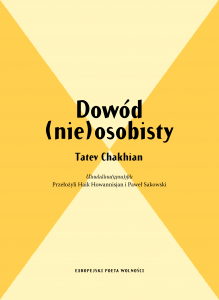 Tatev Chakhian’s poetry is like the wind blowing through the old forest. It is with extraordinary lightness that it touches the problems grown deeply into the history of an individual and the community. It looks at the underside of daily events and reveals their mysterious, non-obvious nature. To Chakhian, the world seems to be a circus for adults, in which the shooting is real and the lion bites the tamer’s head off. Or as a hotel, in which “only poems that grow/ have the longevity of soap bubbles,/ as small as minibar bottles/ and as interrupted as receptionists’ smiles” (transl. by Paweł Sakowski). Fortunately, Chakhian, peeping through the window, is able to make a pretty good draught in this hotel.

Armenian poet and visual artist born in Yerevan in 1992, she currently lives in Poland. In 2014, she became one of the laureates of the Dionizy Maliszewski Literary Competition organized in Ostrołęka, and in 2016 she was granted the prize of the Gazeta Obywatelska biweekly. She has also won the Literary Award of the First Lady of Armenia, as well as Sahak Partev – a prize granted by the Catholic Church in Armenia. Tatev participated in Poeziefestival Berlin 2012 and the 2013 Literary Ark festival.

In her works, the artist combines poetry with visual arts. Her paper collages were exhibited in Armenia and Brussels. Tatev cooperates with city activists, sculptors, film-makers, and musicians. She graduated from cultural anthropology at the State University in Yerevan; her academic interests include the semiotics of the city, “reading” the city as a text.

Tatev is an editor of an internet magazine called iranliter.com, which focuses on the presentation of translations of contemporary Iranian poetry; she works as a teacher, editor, and translator. Her poems have been translated into English, German, Polish, Persian, and Russian, and have been published in many anthologies and magazines. In 2016, she published her first book of poetry entitled Անանձնա(գրա)յին ((Non)-Identity Card).

Born in Yerevan. In 2011, he was awarded the title of a doctor of physical sciences by the Institute of Nuclear Physics, Polish Academy of Sciences in Cracow. Since 2013, he is a sworn translator of the Armenian language. He is the author of the translation of Bogdan Kasprowicz’s book of poetry Chaczkar. Haik Howannisjan cooperates with the Polish-Armenian periodical Awedis. He is a community activist; as a part of his cooperation with the Armenian Cultural Society, he teaches Polish to Armenians and runs classes of Armenian.

Born in 1972 at Choszczno, he now lives in Poznan. A professional translator specialising in conference interpretation and literary translation, writer and actor. Translator of poems by Bukowski, as well as works by other poets and authors of songs, including Bob Dylan, George Harrison, and Tom Waits. The author of a single novel, which was published in Poland; he is currently working on the second one. The winner of the national playwriting competition “Looking for a Polish Shakespeare”, he currently plays in the Teatr u Przyjaciół theatre in Poznan and in selected TV productions.