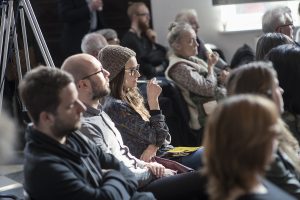 On June 9-11, 2022, a unique festival of literature will be held in Gdańsk for the seventh time: European Poet of Freedom celebrates the continent’s contemporary poetry, enables Polish audiences to meet its creators, and directs attention to issues important to the shape and development of poetry. Every two years, the European Poet of Freedom International Literature Festival invites the public to Gdańsk for meetings, discussions, workshops and artistic projects. During the festival, the Gdańsk Literary Award gala is also held.

The strength of the EPW is its multifaceted character – in addition to the Festival and the Award, each subsequent edition of the project enriches Polish literature with translations of volumes by renowned living European poets. Forty-six collections have been published so far, and in 2022 this number will be increased by another five volumes by the authors nominated in this year’s edition of the Award. Believing that poetry is not lost in (good) translation, the EPW also recognises the translators of the nominated volumes and awards a separate prize to the authors of the translation of the winning collection. It is worth noting that for many authors, the publication within the series was their debut on the Polish publishing market and perhaps the only opportunity to present their own poetry in such a comprehensive way.

The poets and translators nominated for the Award in 2022: