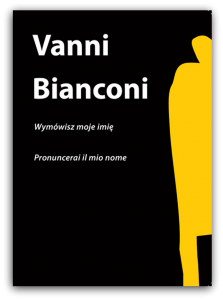 Cosmogony opens up Vanni Bianconi’s book – it’s a poem about English woman, her daughter and Italian husband/father/poet. When the woman hears her daughter crying, she tries to calm her down and without knowing what caused the tears she says instinctively: “I know.” The girl repeats these words, she seems to do it unconsciously, but does she really? (…) A little girl knows
neither her mum’s nor her dad’s language. However, she expresses her own “I know” and we get the feeling that it isn’t just a phonetic fact, random cluster of sounds, but something more. It provides reciprocity and relates to mother’s tender answer “I know”, when she was helplessly listening to her daughter’s cry. Crying as a mystery. “Ainóu” is something we say with a bit of exaggeration to someone else, to foreign language, to someone else’s story. While approaching the mystery, we agree to suspense our disbelief just like cosmologist who assumes the existence of the dark matter. Together with Vanni Bianconi we get to know the heroes of his poems: a woman reminiscing her old lovers, a man whose lawnmower serves as his Ford Gran Torino, a child who is just about to be born, an old lady from the nursing home, who confuses names and faces, but still remembers persimmons.
“Ainóu” among its many meanings can be associated with one in particular. It forces us to think about one extraordinary – cheeky, but also sensitive – relationship with someone else’s text. It brings us to translator’s situation, who needs to be a bit of a gambler, as he/she always takes the risk counting that at the end the reader would tell him “I know.”
Description comes from the translator’s note placed in the book.
The book is available at terytoria.com.pl and at City Culture Institute (Długi Targ 39/40, Gdańsk.) 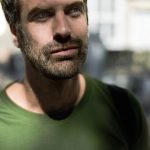 Born in 1977 in Locarno, Switzerland, poet, writer, translator, Vanni Bianconi graduated from the University of Milan. Ha participated in poetry workshops led by Derek Walcott and Michael Donaghy. Bianconi is a fouder and artistic director of Babel Festival. He currently lives in London.

His poems, translated into eight languages, have been published in international magazines and anthologies. “Faura dei morti”, Bianconi’s first collection of poems, waspublished in 2004 by Marcos y Marcos publishing house. “Ora prima. Seipoesie lunghe”, his first book, was awarded Schiller Memorial Prizein 2009. “Il passo dell’uomo”, another collection, was published in 2012. Bianconi also has also been working as a translator of worksof W.H. Auden, William Faulkner, William Somerset Maugham, Denton Welch andErich Fromm. He received the Marazza Foundation Prize for his translation of“For The Time Being” by W.H. Auden. Vanni Bianconi has been nominated for the The European Poet of Freedom Literary Award for his 2012 “Il passo dell’uomo.”

Poet, translator of Italian literature, currently working as an editor for Nasza Księgarnia publishing house. For her debut collection of poems titled „sprzedawcy kieszonkowych lusterek” (“pocket mirror sellers”) she was awarded the Polish Association of Book Publishers Award and Kazimiera

Iłłakowiczówna Prize. In 2006-2011 she wrote “Poet of the Holiday Edition” column in “Gazeta Wyborcza”. Wajs has translated works of Umberto Eco, Italo Calvino, Tiziano Terzani, Dino Buzzati, Sandro Veronesi, Oriana Fallaci. Together with Vanni Bianconi she participated in a translation project for Polish and Swiss poets at the Conrad Festival and the Babel Festival.