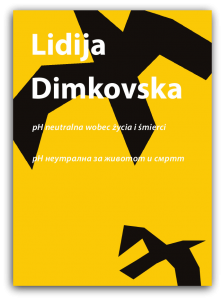 The poems from “pH Neutral History”, not dissimilar from Dimkovska’s six other poetry books, are filled with widely spread associations, cutting retorts, ruthless tattoos and parodic paraphrases. Hers is independent poetry, courageous, prone to autodestructive reflection, full of unusual and surprising metaphors. Dimkovska takes full advantage of the freedom to create her own poetic world contradicting in its contemporaneity Macedonian cultural and religious tradition. The poet unerths what is live in the tradition and in the poetry. Liberated from banality, she searches for meaning of its all, not without irony, cladding the pressing issues of our times in the right poetic form. Dimkovska is not scared to talk about problems of physicality regardless of social and poetic constraints. Strong, often radical, she is always faithful to her own ars poetica.

Poet, writer, essayist and translator. Born in 1971 in Skopje, she studied comparative literature studies at the local university and went on to acquire PhD degree in Romanian literature at the University of Bucharest, where she worked as a lecturer in Macedonian language and literature. she currently lives in Lublana and works as a translator of Romanian and Slovenian literature into Macedonian. Dimkovska regularly participates in a variety of international literary festivals and residential programmes. Her debut poetry collection “The Offspring of the East”, co-written with Boris Cavkoski in 1992, was awarded the prize for the best poetic debut.

Considerable parts of the “pH Neutral History” have been translated into German (“Decent Girl”, nominated for the Brücke Berlin Prize in 2012), English (“pH Neutral History”, nominated for the Best Translated Book Award in 2013), and Romanian (“Difference”). In 2009 Dimkovska was awarded the Hubert Burdy poetry prize in Germany and in 2012 and the Tudor Arghezi international poetry prize in Romania. She is an author of two novels. “Hidden Camera” has been translated into Slovenian, Slovak, Polish and Bulgarian, and named the best book of the year by the Macedonian Writers’ Association; “A Spare Life” was also awarded the best book of the year prize by the Macedonian Writers’ Association and the European Union Prize for Literature in 2013. Dimkovska has participated in many international literary festivals and residential programmes.

Lidija Dimkovska is nominated for the the European Poet of Freedom Literary Award for “Neutralna za životot i smrtta” (“pH, Obojętna na życie i śmierć”, Blesok, Skopje) written in 2009. The collection was partially translated and published in Austria, The United States, Slovenia and Romania.

Translator, writer and journalist. Worked for, among others, for Czytelnik publishing house, Polish Radio’s Department of Literature, “Literatura na Świecie” magazine. Her 1962 debut colection of stories based of traditional Yogoslavian tales “Bajki spod pigwy” was co-written with her husband Branko  Ćirlić. In 1966 she debuted with the translation of Ivan Kušan’s “Zagonetni dječak.” She has translated into Polish over 60 works of writers from former Yugoslavia, often adding commentary and notes.From Macedonian into Polish Danuta Cirlić-Straszyńska has translated Živko Čingo’s “Paskvelia” and Lidija Dimkovska’s “Hidden Camera”. She has also contributed to multiple collections and anthologies of former Yugoslavian writers.Ćirlić-Straszyńska was awarded the golden star of the Order of the Yugoslavian Banner, the Serbian Pen Club Award (1980), the ZAIKS Writers’ Association Award (1984), the Literatura na Świecie Award (2005), Macedonian Translators’ Association Award (1984), and Polish Translators’ Association Award (1984).