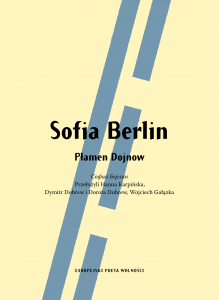 Plamen Doinov is a humourist and caricaturist, who mercilessly settles accounts with the actors of great History, enhancing the importance of the daily actors of the third plan: the park cleaner who gets to know and organises the world around him with the help of the spiked litter picker, female prisoners celebrating Christmas, or a toilet attendant weaving a philosophical monologue on masculinity and femininity. But Doinov’s poetry also has another face to it – a lyrical, sometimes sentimental one, and, rarely, metaphysical. It is as if for him, sarcasm opened the gate to non-mediated experience, to truth as simple as the reflection of the sky in a well.

Plamen Doinov (b. 1969 in Razgrad). A poet, playwright, essayist and literary scholar. He debuted in 1991 and has published nine books of poems, including Post festum. Надгробни надписи и стихотворения (Post festum. Grave Inscriptions and Poems, 1992), Висящите градини на България (The Hanging Gardens of Bulgaria, 1997), Истински истории (True Stories, 2000), Кафепоеми (Coffee Poems, 2003) and София Берлин (Sofia Berlin, 2012) and Балът на тираните (Ball of Tyrants, 2016). His plays have been played on radio theatre and on Bulgarian theatre scenes, while the play The Voices of the Others was presented at the Polski Theatre in Poznan as a part of the New Century-New Dramas festival in 2007.

Plamen Dainov is the author of many works devoted to literary studies and literary criticism. His works have been translated into the English, Croatian, Finnish, French, Spanish, Macedonian, German, Polish, Serbian and Turkish languages. Plamen Doinov works as a member of the editorial team of the Literaturen westnik literary weekly and as a lecturer of literary studies at the New Bulgarian University.

For his works, he has received many Bulgarian awards and honourable mentions, including the Nikolai Kantchev and Ivan Nikolov poetry awards, Ivan Radoev and Askeer theatre awards, and Christo G. Danov and Ivan Dinkov awards for literary criticism and scholarly works.

Hanna Karpińska, was born and lives in Warsaw, a translator of literature, scholarly works and an interpreter. A graduate of Slavic studies at Jagiellonian University and journalism at the University of Warsaw, she mainly translates from Bulgarian, but also from Macedonian, Russian, and French. She has translated and published more than 20 books of literature; the plays she translated have been staged in a dozen or so Polish theatres. She is the author of articles devoted to Bulgarian literature and the problems of translation; she has organised and run translation workshops for students of the University of Lodz and the Maria Curie-Skłodowska University in Lublin. Hanna Karpińska was honoured with the ZAiKS award for outstanding achievements in the area of translation from foreign languages and the 1st Class Order of Saints Cyril and Methodius conferred by the Republic of Bulgaria.

Wojciech Gałązka (b. 1947 at Brzeziny). A Bulgarian philologist, translator, and diplomat, he studied at Jagiellonian University and is a doctor of humanities. Since 1993 he has been working at the Ministry of Foreign Affairs – his positions have included that of the director of the Polish Institute in Sofia and consul in Lutsk and Sofia. A laureate of the Saint Euthymius of Tarnovo International Award (1990), an honorary doctor of the University of Veliko Tarnovo (1999) and the Lesya Ukrainka Eastern European National University in Lutsk (2007).

The author of scholarly works and many articles, as well as translations of poetry by such authors as Geo Milev, Atanas Dalchev, Nikolai Kynchev and Zdravko Kisiov, and a co-author of the anthologies Niewidzialne skrzydła, Antologia poezji bułgarskiej od IX wieku do 1944 roku (Invisible Wings. An Athology of Bulgarian Poetry from the 9th century to 1944) and Spis powszechny dzikich zajęcy (Census of Wild Hares). He publishes his translations at www.literaturabulgarska.vilnet.pl.