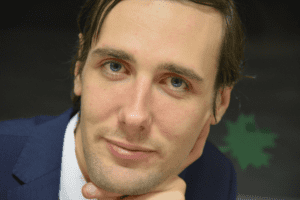 Arvis Viguls’s Blusu cirks [Flea Circus] was published in Latvia by Neputns publishing house in 2021 and contains poems written between 2017 and 2020. The volume was shortlisted for the EPF Award in the translation proposed by translator and researcher of Latvian literature Piotr Ruciński.

This is what Arvis Viguls said about Flea Circus: “For me, this is a book of opposites – the absurd and the fantastic, which seems to be trying its best to fit into reality, are interspersed with autobiographical motifs and real facts, which in the end take revenge on the imagination, proving to be no less weird than the fruits of my imagination.”

Flea circus, an old circus sideshow attraction, perfectly conveys the nature of Viguls’s poetry. His poems are surprising, riveting representations full of extraordinary events and paradoxical observations. Under the surface, we also find a deeper reflection on humans and their place in the contemporary world. The poet refers to the bond between humans and nature, looking for balance in this relationship, for centuries dominated by man. He asks questions and plays with associations. 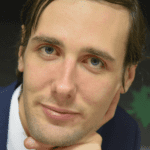 Arvis Viguls (b. 1987) is a Latvian poet, literary critic and translator, one of the most appreciated young generation authors in Latvia. In 2017, Viguls was named one of the ten most interesting and important young European writers by the Literature Across Frontiers network of literary organizations. His debut volume Istaba [Room] was warmly received by literary critics and readers alike. His two subsequent books, 5:00 (2012) and Grāmata (2018), enjoyed a similar reception. Viguls’s latest volume, Blusu cirks [Flea Circus], was published by Neputns in 2021 and shortlisted for the Latvian Laligaba award in the Poetry section. Arvis Viguls is also a literary translator, regularly translating from English, Spanish, Russian, and Serbo-Croat (he translated into Latvian works by Josif Brodski, Walt Whitman, W.B. Yeats and Vasko Popa, among others). His own works have been translated into over twenty languages. Arvis Viguls lives and works in Riga. 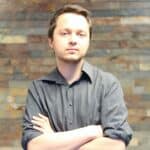 Piotr Ruciński (b. 1986) is a graduate of Baltic philology at the University of Warsaw and researcher of Latvian literature. His research interests span contemporary Latvian literature, particularly poetry. With a view to future publications, he translated works by Kārlis Vērdiņš, Klāvs Elsbergs, Māra Zalīte, Artis Ostups, and Uldis Bērziņš. His other passion is American poetry and its ties with the literature of the Baltic states. He wrote his MA on two foremost representatives of Latvian poetry in emigration: Linards Tauns and Gunārs Saliņš. He lives and works in Vilnius.