Darko Cvijetić, The snow was doing everything not to fall

Snijeg je dobro pazio da ne padne [The snow was doing everything not to fall] is a collection by Bosnian-Herzegovinian poet Darko Cvijetić published in 2019 by the Zagreb-based VBZ publishing house. Following Ježene kožice (Goosebumps, EPF 2020), this is yet another volume by Cvijetić shortlisted for the EPF Award, again upon the recommendation of his translator Miłosz Waligórski.

Poems from this volume stir our keenly generalizing memory from its lethargy. Their subject enters the skin (soul and body) of victims, perpetrators, and even murder weapons, shedding light on the subject from many dimensions. He demonstrates that – by adopting an ingenuous, empathetic perspective and using proper means of expression, austere and devoid of metaphors – one may really come close to someone, tell their suddenly interrupted story to the end, and cover it with snow, which – without poetry – is ‘doing everything not to fall’. That it is possible to purge oneself from layers of dark past and therein find freedom.

In Cvijetić’s latest volume, we hear a voice demanding not just remembrance but completion – achieved by finishing an unfinished life and ridding it of any extras and unnecessary attributes. The poet argues that poetry may heal unhealed wounds and complete someone’s life story, bringing salvation through said completion. In this volume, the above conviction resounds ever clearer, with tones that are purer and more distinctive than before. Its language is even more unique, founded on creative word formation, idiolectal, looking for its own paths through tangled-up experiences. 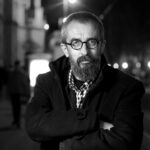 Darko Cvijetić (b. 1968) is a poet, writer, director, actor and dramaturg from Bosnia and Herzegovina of Croatian and Serbian origin. He is the author of eleven books of poetry: Noćni Gorbačov (1990, Nocturnal Gorbachev), Himenica (1996, Hymen Swallet), Manifest Mlade Bosne (2000, Young Bosnia Manifesto), Passport for Sforland (2004), Masovne razglednice iz Bosne (2012, Mass postcards from Bosnia), Konopci s otiskom vrata (2013, Ropes with neckprints), Mali ekshumatorski eseji (2015, Smalls essays on exhumation), Emotikoni u Viberu (2016, Emoticons on Viber), Paraolimpijske himne (2017, Paralympic hymns), Ježene kožice (2017, Goosebumps), and Snijeg je dobro pazio da ne padne (2019, The snow was doing everything not to fall). He also wrote the novels Schindlerov lift (2019, Schindler’s lift) and Što na podu spavaš (2020, Why are you sleeping on the floor), as well as a collection of short stories Noćna straža (2021, Night watch). His poems have been translated into numerous languages. As an actor, he played, among others, in Crime and Punishment (dir. by Gradimir Gojer, 2007); A Tomb for Boris Davidovich (dir. by Gradimir Gojer, 2009); Waiting for Godot (dir. by Radenko Bilbija Clow, 2004); and Endgame (dir. by Dragoljub Mutić, 1990). He directs theatre productions and creates original theatre projects. Cvijetić is a member of PEN Bosnia and Herzegovina and the Association of Writers of Bosnia and Herzegovina. He works as a director and dramaturg at the Prijedor Theatre in Republika Srpska. 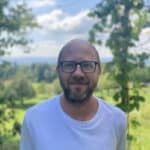