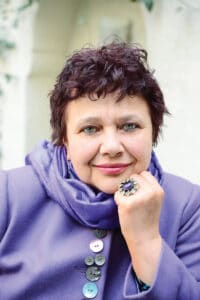 Седем (Seven) is a collection of poems by Mirela Ivanova, published in Bulgaria in 2018 by Hermes publishing house. The book won her three important literary prizes: the Sofia Literary Award, the Nikolai Kanchev Award and the “Peroto” Award. Recommended by the translator Magdalena Pytlak, it was shortlisted for the 2024 EPF Award.

Seven is a book that restores a sense of freedom, astonishes readers with its depth of brevity and engrosses them with its verbal virtuosity. Words are what Ivanova loves the most – their meanings, sounds, traditions and the language carrying them represent fundamental values for the poet. In the context of this volume, Prof. Plamen Doynov wrote that “in Mirela Ivanova’s poetry, one may discern the landscape of Bulgarian existence – with hundreds of manually sketched details, with pathos and sentiments balancing on a tightrope of irony. Hers is powerful poetry. The author’s poems represent some of the most poignant lyrical texts written in Bulgarian in the early 21st century.”

Mirela Ivanova’s poetry combines the landscape of daily life in Bulgaria with the modern world’s universal maladies. The poet nimbly changes epochs, freely combining different threads, sometimes deliberately oscillating between sentimentalism and irony. Yet she always remains precise in her choice of words. With each of her poetry books, she proves that the essence of poetry is freedom: of style, image, words, the individual, and the community. 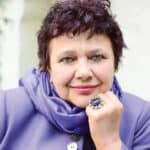 Mirela Ivanova (b. 1962) is a poet, journalist and translator from Bulgaria, graduate of Bulgarian and Russian philology from the University of Plovdiv. She published her first poems while still a student in the Родна реч magazine. She is the author of nine volumes of poetry, the book Бавно which contains eleven poems and eleven short stories, as well as a collection of short stories and essays. Together with Boĭko Lambovski, she created the Friday 13th poetry collective. Ivanova is also a screenwriter and organizer of cultural events, particularly involved in building Bulgarian-German dialogue. She translates from German. Mirela Ivanova’s poetry has received numerous awards, both in Bulgaria (e.g. Award of the Association of Bulgarian Writers, Nikolai Kanchev Award, “Peroto”) and abroad (Hubert Burda Prize for young poets from Eastern Europe). She spent many years as curator at the Ivan Vazov Museum. Since 2016, she has been working as a dramaturg at the Ivan Vazov National Theatre. She lives in Sofia. 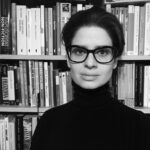 Magdalena Pytlak (b. 1981) is an expert in Bulgarian and Slavic studies and translator with a PhD in literary studies (2010). She works as an assistant professor at the Institute of Slavic Philology of the Jagiellonian University. Pytlak is the author of Polifoniczność w przekładzie. O tym jak Polacy i Bułgarzy czytają Biesy Fiodora Dostojewskiego, numerous academic publications and scientific texts for the general public. She translates contemporary Bulgarian literature. She was twice shortlisted for the Gdynia Literary Award (2018, 2019), and her translation of Milen Ruskov’s Wzniesienie won her the Literatura na Świecie prize (2018). In 2019, she received the Angelus Central European Literature Award for translating Georgi Gospodinov’s Fizyka smutku into Polish. She is a member of the Association of Literary Translators.