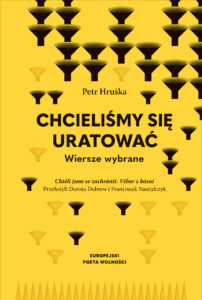 To write understandable poetry requires talent, experience, courage and a healthy attitude towards oneself. The author of understandable poems relies on direct experience and its truth. He eavesdrops and draws from his suspicions, ignoring the whispers of language that quickly loses value, hiding what it wants to show. Petr Hruška’s poems are like this: transparent, precise and clear. You want to listen to them because they have their melody. They do not follow some rhythmic principle, but rather the rhythm of a breath belonging to a witness, “the voyeur”, who tells us one story after another. But under the apparent surface, Hruška’s poems hide a secret, something that defies our cognitive routine and strikes our spiritual chord, making us gawk and stare in wonder. In everyday life, which resembles compound and complex sentences, it only takes one changed word to make a day unusual. The real trick is to know which word to change. And Petr Hruška knows just that.

Petr Hruška (born 1964) is a poet, screenwriter, historian and literary theorist. He is also an engineer by profession. He lives in Ostrava and works for the Czech Academy of Sciences and as an academic lecturer. He is the author of several poetry volumes. He received the Czech State Award for Literature for his book of poetry Darmata (2012). He has also won other prestigious awards, including the Jan Skácel Award and Dresdener Lyrikpreis. He is the author of two monographs: Někde tady. Český básnik Karel Šiktanc (Somewhere here. Czech poet Karel Šiktanc, 2010), and Daleko do ničeho. Básník Ivan Wernisch (Far from nothing. Poet Ivan Wernisch, 2019). Hruška also writes short prose, essays and literary sketches. His writings have been translated into many languages. The Mikołowski Institute published his two books of poetry, Unrest Rooms (2011) and Darmata (2017), translated into Polish by Franciszek Nastulczyk.

Dorota  Dobrew (born 1959) is a translator of Czech and Bulgarian literature with a degree in Czech studies. She translated over thirty books and publications from Czech to Polish, including works of classical poets Vitezslav Nezval, Jaroslav Seifert and Jan Zahradniczek; underground authors Petr Placak, Ivan Martin Jirous and Egon Bonde; and contemporary poets Petr Hruška, Petr Borkovec and Jaromir Typlt. Through her translations Polish readers became acquainted with the writings of Antonin Bajaj, Emil Hakl, Jiři Hajiczek and Tomaš Zmeškal. She also translates children’s literature. Dobrew has won the Literatura na Świecie award (2008) for her translation of Straszydła na co dzień by Karl Michal. In 2001, she received the prestigious Premia Bohemica award for foreign translators of Czech literature.