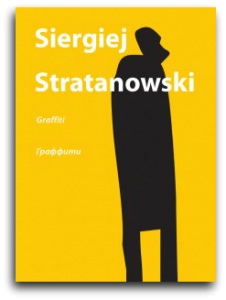 Seven chapters of Graffiti combine bitterly ironic poems and poetic notes (devices quite commonly used by the author), which at its fragmentary structure send us back to urban graffiti and present a sceptical view of Russian contemporary consciousness of “everyday man” being in awe of mental absurdity of everlasting totalitarianism and genocide heritage.
The book is filled with lyrical miniatures and shots in a way as if they were taken straight up from the diary and set in hellish and terrifying everyday reality. Faced with expanding chauvinistic amok, wave of propaganda lies, faked forms of public discourse and evoked value system accepted in Russia till now, Stratanowski’s voice succeeds in keeping admirable spiritual sovereignty, honest tone, and unbreakable individual character, which simply can’t be faked.
The book is available at terytoria.com.pl and at City Culture Institute (Długi Targ 39/40, Gdańsk). 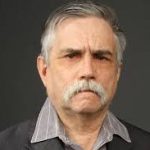 Born in Leningrad in 1944, poet and literary critic, Sergei Stratanovski graduated with a degree in Russian Philology at Leningrad State University in 1968. Four years younger than Joseph Brodsky, he also belonged to the samizdat, a dissident culture in Soviet Russia, as the movement’s poet, philosopher and ideologist. Years 1968-1973 witnessed his first period of intensive poetic labour: Stratanovski published his poetry, reviews and literary criticism  in samizdat’s periodicals “37”, “Times”, “Severnaya Poczta”. When the periodical closed down, Stratanovski and Kirill Butyrin created “Obvodny Canal”, literary and socio-philosophical journal published until the 1980s. Stratanovski was a member of 81 Club created by over seventy authors representing unofficial literature in Leningrad.

Stratanovski has received multiple awards: the The Tsarskoye Selo Artistic Award, the Boris Pasternak Award, the Nikolai Gogol Award, the Andrei Bely Award, The Giuseppe Carducci Award, the award of the VIII International Poetry Biennale in Moscow. He is a member of Writers’ Association of Saint Petersburg, Russian PEN Club,  grant holder of Joseph Brodsky’s Foundation.

His poems have been translated into Polish, Italian and other languages.Faithful to his ideals, Sergei Stratanovski maintains his political stance. He has condemned and been very vocal about both wars in Chechnya, invasion of Georgia in 2008, Putin’s Russia’s aggressive policy on Baltic states and also aggression against Ukraine, annexation of Crimea, invasion of Donbas and Katyń massacre ( after the release of Wajda’s film). In 2002 the poet participated in Czesław Miłosz Festival in Krakow.

Sergei Stratanovski is nominated for the European Poet of Freedom Literary Award for “Graffiti” from 2011. 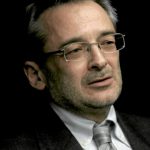 Literary critic, essayist and poet, translator from Russian, German, English, Belarusian and Ukrainian. Since his debut as a Russian translator in the 1970s, he has translated works of Fyodor Dostoyevsky, Thomas Stearns Eliot, Johann Wolfgang von Goethe, Reiner Maria Rilke. Since 2010 he has chaired Polish PEN Club. He has been awarded multiple awards: the Polish Translators’ Association, the PEN Club Award and the Minister of Culture Award. He juries literature in the COGITO competition for the Public Media Award.