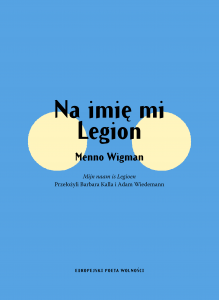 Menno Wigman’s language breathes with the street and the library. His works – saturated with the observation of daily occurrences, and not shying away from down-to-earthness and explicitness – are at the same time a nonchalant conversation with the books which have got under the poet’s skin. Wigman’s protagonist youthfully banters with the world, aware that his poems and remarks are not necessary to anyone apart from poetry readers. Is he blaming so-called society for it? He himself is not any better: “A book? From cover to cover? I’m short of strength. / I’m tired even by a single poem” (transl. by Anna Moroz-Darska) – he confesses in one of the texts. In these non-pretentious poems, taking place in very commonplace spaces such as bars and supermarkets, Wigman manages to combine lightness with formal discipline. He is not tethered to the form, but his classicism is as fresh and as truculent as a hand grenade. And disarmingly candid.

Menno Wigman (b. 1966 in Beverwijk, Holland) – the author of more than ten books of poems, and a collection of essays about poetry, a translator. In 2005, he stayed at the psychiatric hospital in Den Dolder as a writer in residence, involving the patients in the creation of poetry. Between 2012 and 2014, Menno Wigman fulfilled the function of the City Poet of Amsterdam. At that time, he organised poetry workshops in unusual locations such as the Bijlmerbajes prison in Amsterdam. He regularly writes poems delivered during the funerals of people who died in loneliness. He is a laureate of two prestigious literary awards (the Jan Campert-prijs, 2002, and A. Roland Holst-Penning, 2015). The poetry book nominated for the European Poet of Freedom Award, Mijn naam is Legioen (My Name is Legion) was issued in 2012 and was so popular that it had six reprints. In 2013, Wigman was nominated for VSB Poëzieprijs, the most important award for poetry in the Netherlandic languages (Dutch and Flemish).

Barbara Kalla (b. 1966 in Kamienna Góra) – a Netherlandic philologist, Head of the Modern Dutch and Afrikaans Literature Institute, Netherlandic Philology Department, University of Wroclaw. The author of a monography Programy romantyzmu w Niderlandach (Programmes of Romanticism in the Netherlands; WUWr., 2007) and Huisbeelden in de moderne Nederlandstalige poëzie (Images of Home in Contemporary Netherlandic Poetry; Gent, Academia Press, 2012). She published several dozen articles and co-edited several collections devoted to Netherlandic literature. Barbara Kalla closely cooperates with other researchers as a part of international networks of scholars doing research into modern Netherlandic literature. She is the editor-in-chief of the academic series Lage Landen Studies (Gent, Academia Press). Her primary research interests include poetry and literature for children and youth. As a co-organiser, animator and moderator of meetings with Flemish and Dutch poets and writers, she promotes the literature and culture of the Netherlands in Poland. She translates poetry, and is the head of the project “Anthology of Dutch and Flemish Short Stories” as a part of which stories are translated by students and graduates of the Wroclaw Netherlandic philology.

Adam Wiedemann (b. 1967 in Krotoszyn) – a poet, prose writer, music critic, and translator. He has published 9 books of poetry: Samczyk (1996), Rozrusznik (1998), Konwalia (2001), Kalipso (2004), Pensum (2007), Filtry (2008), Dywan (2010), Z ruchem (2014) and Metro na Żerań (2016), three books of prose: Wszędobylstwo porządku (1997), Sęk Pies Brew (1998; German edition in 2001, Russian edition in 2003) and Odpowiadania (2011), as well as a collection of oneiric writings Sceny łóżkowe (2005; Slovenian edition in 2007). Collections of his poems have been published in the Slovenian (2002), Serbian (2010) and Ukrainian (2015) languages. His texts on literature and music are gathered in two books: Poczytalność and Posłuszność (both 2016). He is a co-author of Końcówki, an extended interview with Henryk Bereza (2010); in 2012 a collection of Mieczysław Piotrowski’s dramas he edited was issued. As a translator of Slovenian poetry, he published books by Primož Čučnik, Miklavž Komelj and Peter Semolič; he translated Andrij Bondar’s and Marianna Kijanowska’s poems from the Ukrainian language, and Gertrude Stein’s and Vivienne Plumb’s works from the English language. He is a laureate of the PTWK (1998), Fundacja Kościelskich (1999), and Gdynia (2008) awards and was nominated for the Cogito, Paszport Polityki, Silesius (three times) and Nike (three times) awards. He lives in Warsaw.