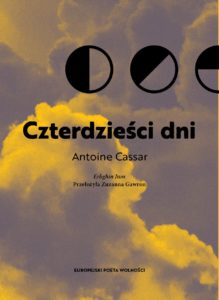 Cassar wanders through life and text, through landscapes and the history of literature, suffering like Job and being exposed to temptations like Christ during his forty-day fast. Romantic pathos and Baroque metaphors are his weapon in the struggle against madness. „Erbgħim Jum” (2017) is a collection of poems about the traumas of childhood, depression and walking as a form of self-therapy. In 2018, the volume received the National Book Prize of Malta.

Antoine Cassar (b. 1978 in London) is a Maltese poet, translator, and cultural activist. His latest book, Erbgħin Jum (40 Days, publ. by EDE Books, 2017) is a collection of poems on childhood trauma, depression, and walking as a form of self-therapy; in 2018, it was shortlisted for the National Book Award. Passaport (2009), a poem published as an anti-passport for all human beings and landscapes, has been published in eleven languages and adapted for the stage in Malta (winning Best Production and Best Actress awards at the MADC One Act Play Festival in 2010); it has also been played in theatres in France, Belgium, Italy and Australia. Cassar’s multilingual poem Merħba, a poem of hospitality received the 2009 United Planet Writing Prize. His other publications include the poem Mappa tal-Mediterran (Għaqda tal-Malti, 2013) and collection of poems Bejn / Between (publ. by Skarta, 2011). Cassar has translated the works of many Maltese writers into English and Spanish. He is greatly devoted to the task of translating Pablo Neruda and Walt Whitman’s oeuvre into Maltese. He created the Spread poetry, not fear project on social media, as a reaction to the 2015 Paris attacks and the related fear-mongering and manipulations in the media.

Zuzanna Gawron (b. 1983 in Warsaw) is a translator and language teacher. Since the age of six, she has been associated with Spain, where she completed Spanish Studies and post-graduate studies in translation and interpretation. She received the scholarship of the Spanish Ministry of Education and Culture (2004–8), and graduated from the Centro del Formación del Teatro de la Escucha in Madrid. She held workshops on social and political theatre in several countries, including Spain and Poland. Gawron translated the poetic prose of Alejandra Pizarnik about the feeling of alienation in language and impossibility to express oneself. The text was adapted for the stage (Usuwanie Alejandry, dir. by Edward Gramont, Teatr TAQ, Nowa Sól, 2006 and later productions). Gawron has experienced long-term migration herself, which drove her to research and write about the situation of migrants in the contemporary world, publishing her own texts and articles in journals: the Finnish Signalu and Polish Rita Baum. Her literary reportages on the subject have been adapted for performative reading (Noc jest czarna / ciemnoskóra jest noc) and are still ‘read’. She is currently working on an educational and art project Migrartes and completing her translation of A. Cassar’s Passport.