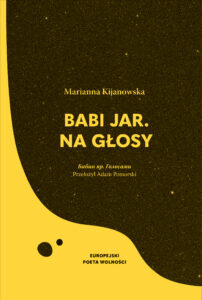 Marianna Kiyanovska’s book of poetry is nothing less than a modern-day dziady, a celebration of the spirits of dead ancestors. The poet acts as a priestess, giving voice to ghosts from the past. To those whose life was scarred by inexpressible misery: hunger, homelessness, loneliness and savagery suffered at the hands of invaders and next-door neighbours. To Jews who were shot, gassed, petrified by fear, cramped like rats in holes, dens and dark hiding places, buried in mass graves like spoiled meat. These voices may differ in wording, tone or emotions, but together, they compose a choir that weaves a tragic narrative about the past century. Much like the choirs of ancient times, it warns us of the consequences of evil that dwells in all of us. It is hard to believe how much pain can be carried by a poem. How many wrongs a poem can voice while still salvaging its poetry and love. The maximalism of Marianna Kiyanovska’s lyrics manifests itself in confrontation with atrocious pain, leading us, ultimately, towards catharsis. 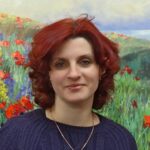 Marianna Kiyanovska (born 1973) is a poet, translator and author of literary sketches and artistic prose. She belongs to a generation that started their literary careers in the 1990s, after Ukraine regained its independence. Kiyanovska has been a member of the Ukrainian Writers’ Society since 1996, and also belongs to the Ukrainian PEN Club. In 2003, she lived in Warsaw as a participant of GAUDE POLONIA programme, taking part in literary festivals and artistic events organized in the country. She became known as a translator with her masterful renditions of Tuwim’s poems for children, and excellent, innovative translations of Leśmian. She has her own column in Kryvbas Courier titled “New Polish Literature,” and publishes translated works of contemporary Polish poets (i. a. Eugeniusz Tkaczyszyn-Dycki and Adam Wiedemann). Her crown achievement is the translation of Adam Mickiewicz’s Dziady. She has thus far published 12 books of poetry (including one volume of collected poems). In February 2020, she received the Shevchenko National Prize, the highest national prize in Ukraine, for her last book The Voices of Babyn Yar (2017).

Adam Pomorski is a literary critic and translator. He translates literature from Russian, German, English, Belarusian and Ukrainian, among others works of Fyodor Dostoevsky, Thomas Stearns Eliot, Johann Wolfgang von Goethe and Reiner Maria Rilke. He has been the president of Polish PEN Club since 2010. He started his career in the 1970s, translating Russian literature. He has won several awards, including the Polish Translators Society Award, PEN Club Award and the Ministry of Culture Award. He is a member of the COGITO Public Media Award jury in the fiction category.