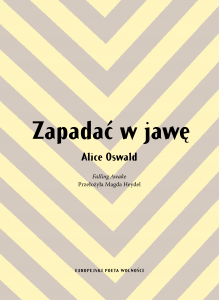 Alice Oswald’s poetry takes place In-between: at dusk, at dawn and in the slit of light at the border of life and death. And how busy this border is! Flies are excitedly discussing manure, a flower is closing its eyelids with a hiss, and a badger is stamping its feet above the dead people’s heads. Oswald’s lyrical images are both brutal and tender, expressionistic and oneiric. In one of the poems, weeding the beans is compared to “scrabbling at the earth”. This single metaphor contains Oswald’s entire writing philosophy: language is the ground, which can be saved from weeds only by our meticulous scrabbling.

Alice Oswald (b. 1966) is the author of seven poetry books. The first one, The Thing in the Gap-Stone Stile (1996) received a Forward Poetry Prize for the best debut. Her second book is a long poem, Dart (2002, awarded with T.S. Eliot Prize), originating from the poet’s wanderings by the river Dart in Devonshire. Her subsequent books: Woods, etc. (2005, Geoffrey Faber Memorial Prize), Weeds and Wild Flowers (2009, illustrated by Jessica Greenman) and A Sleepwalk on the Severn (2009), undertake, in a very non-obvious manner, the topic of nature and the power of human existence in the world. In 2011, the poet published the book Memorial, constituting Homer’s poetically reworked Iliad. This disturbing book was a poetic event in itself and won the Warwick Prize in 2013. It was also nominated for the T.S. Eliot Prize; however, the poet withdrew in protest against a sponsor’s dishonest activities. The book Falling Awake (2016) received the Costa Poetry Award 2016 and the Griffin Prize 2017. The poet lives in Devon, with her husband and three children. 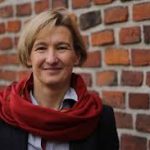 Magda Heydel (b. 1969) is a translator of English literature. She has translated works by Virginia Woolf, Joseph Conrad, T.S. Eliot, Derek Walcott, Seamus Heaney, Roald Dahl, and other writers. She is a double laureate of the award granted by the Literatura na Świecie magazine. Magda Heydel edited Czesław Miłosz’s book Przekłady poetyckie wszystkie (All Poetic Translations, 2015) and Stanisław Barańczak’s work 444 wiersze poetów języka angielskiego XX wieku (444 poems by 20th Century poets of the English Language, 2017). Magda Heydel lectures on the theory and practice of literary translation at the Faculty of Polish Philology, Jagiellonian University, and runs an MA course in literary and culture translation studies. She is a co-author of the anthology Współczesne teorie przekładu (Contemporary translation theories, 2009) and Polska myśl przekładoznawcza (Polish concepts in translation, 2013) as well as the editor-in-chief of the magazine Przekładaniec. A Journal of Translation Studies. She has recently issued a book Gorliwość tłumacza. Przekład poetycki w dziele Czesława Miłosza (Translator’s zeal. Poetic translation in Czesław Miłosz’s works; 2013).