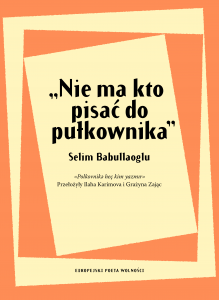 Can a conversation with a child change into a poem? Yes, indeed. Every art consists in the framing of reality, and poetic eavesdropping is not any different from the work of a sculptor trimming his/her vision from excess material. The poet cleans language from the excess buzz. Səlim Babullaoğlu’s poetry is both sapiential and childishly naive, aphoristic, but also discursive. And what is most important – it is aware of its own limitations in its confrontation with the richness of sensations brought about by each subsequent day. In his texts, Babullaoğlu often turns to concrete persons, creating the atmosphere of an intimate friendly conversation which we happen to be overhearing. These are very true-to-life poems in the literal sense; here, childhood meets adulthood and old age to jointly sing a song of delight with the world.

Selim Babullaoglu (Səlim Babullaoğlu) was born in 1972. He studied library science at the State University in Baku. He is a poet, translator, essayist, member of the Association of Azerbaijani Writers and its employee working in the position of the head of the branch dealing with translation and literary contacts. He belongs to the Central Asia PEN Club with its office in Bishkek (Kyrgyzstan). He is a laureate of many literary awards in the field of poetry and translation – not only in his own country, but also abroad (e.g. in Turkey, Serbia, and Kyrgyzstan).

Selim Babullaoglu is one of the most popular modern poets of Azerbaijan. He has published three books of poetry: Tenha (Lonely, 1996), İlyas Göçmenin şekil defteri (Album of İlyas Göçmenin, 2010) and “Polkovnike heç kim yazmır” (“There is No One to Write to the Colonel”, 2013 and 2014).

Selim Babullaoglu’s poems were translated into a dozen or so languages including Turkish, Russian, Ukrainian, Uzbek, English, Georgian, Persian, and Polish, and his poetry books were published in five countries. In Poland, a book of poetry entitled Poświęcone biciu serca (Dedicated to the Heartbeat) was issued (Wroclaw 2007, Wydawnictwo ATUT, 70 pages). The poems were translated from the Azerbaijani original by İlahə Kərimova, Raisa Miskierli, Vusala Mustafayeva and Sonia Piriyeva. The poet came to Poland on the occasion of the premier issue of his book, and he visited Wroclaw, Warsaw, and Cracow.

Grażyna Zając – graduated from Turkology at the Institute of Oriental Studies, Jagiellonian University, in 1983 and was employed there as an assistant professor. This is where she still works. In 1995, she defended her doctoral thesis devoted to the oeuvre of a 20th-century Turkish prose-writer Orhan Kemal, and in 2009 she was awarded a postdoctoral degree on the basis of the book “Smutna ojczyzna i ja smutny”. Kręgi literackie epoki Abdülhamita II w świetle tureckiej autobiografii (Sad is my Motherland and I am Sad”. Literary Circles of the Times of Abdul Hamid II in the Light of Turkish Autobiography). Her scholarly interests include Turkish literature of the 19th and 20th centuries (in particular Ottoman autobiography), Azerbaijani literature, and the literature of Cypriot Turks. Grażyna Zając is the author of three books and several dozen articles and papers. She supports the Polish Tatar environment with her publications and translations, publishing in the Polish Tatar press. She is a translator of Turkish literature into the Polish language.