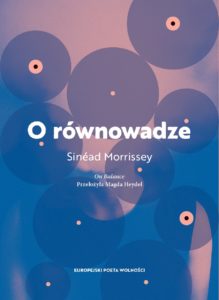 When reading Sinéad Morrissey’s poems, it becomes clear that the world’s balance should by no means be taken for granted. The architecture of this poetry is extravagant and brittle, tiptoeing on the verges of the impossible – yet it proves possible, if only for one beautiful moment.

Sinéad Morrissey (b. 1972 in Country Armagh, Northern Ireland, and raised in Belfast) is a graduate of Trinity College in Dublin. She spent long periods abroad, among others in Japan and New Zealand, before returning to Belfast. In 2014, the city appointed her its inaugural poet laureate. Morrissey wrote six books of poetry: There Was Fire in Vancouver (1996), Between Here and There (2001), The State of the Prisons (2005), Through the Square Window (2009), Parallax and Selected Poems (2013), and On Balance (2017). Parallax won the T.S. Eliot prize and was shortlisted for the National Book Critics Circle Award. Morrissey has also received the Patrick Kavanagh Poetry Award, the Irish Times Poetry Now Award, a Lannan Literary Fellowship, and first place in the 2007 UK National Poetry Competition. Her volume On Balance won the Forward Prize for the best collection of poetry. Sinéad Morrissey teaches creative writing at the Seamus Heaney Centre for Poetry, Queen’s University, Belfast and at Newcastle University.

Magda Heydel (b. 1969) is a translator of English-speaking literature. She has translated, among others, the works of Virginia Woolf, Joseph Conrad, T.S. Eliot, Derek Walcott, Seamus Heaney, and Roald Dahl. Heydel has received the Literatura na Świecie award twice. She edited Przekłady poetyckie wszystkie Czesława Miłosza (2015) and 444 wiersze poetów języka angielskiego XX wieku by Stanisław Barańczak (2017). She teaches the theory and practice of literary translation at the Jagiellonian University’s Faculty of Polish Studies, and is the head of the Literary and Cultural Translation Studies (MA course). She co-wrote the anthologies Współczesne teorie przekładu (2009) and Polska myśl przekładoznawcza (2013), and is the editor-in-chief of Przekładaniec. A Journal of Translation Studies. One of her most recent book is Gorliwość tłumacza. Przekład poetycki w dziele Czesława Miłosza (2013).