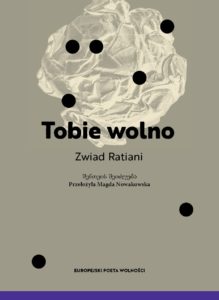 Trying out various versions of himself for the purpose of his poetry, Ratiani hurts his loved ones and annihilates his private life. What does he get in return? The awareness that we are all alone in the face of suffering and death, and that poetry, this possessive mistress, is also a faithful one, who remembers about her poet even after the latter’s death, bringing flowers to his grave each time we reach for his volume.

The publication of „Only You Are Allowed” by Zviad Ratani’s was co-funded by the Ministry of Culture and National Heritage from the Cultural Promotion Fund. Zviad Ratiani (b. 1971) is a poet and translator. He is firmly rooted in the Georgian literary scene and his works have appeared in print since 1992. Ratiani has published five collections of poetry, at the same time translating English and German poems into Georgian. Among his many translations, Zviad Ratiani introduced Georgian readers to such eminent works as the poetry of T.S. Eliot, E. Pound, R. Frost, R.M. Rilke and Paul Celan. For translating the oeuvre of the latter, he received the Goethe Institut Award for the best translation of the year. In 2005, Ratiani received the SABA – the most important Georgian literary award. His poems have been translated into English, German, French, Russian, Azerbaijani, Ukrainian, and Latvian, among others. His poetry appeared in numerous anthologies, such as Ich aber will dem Kaukasos zu… Pop Verlag 2015, Germany; Aus der Ferne: Neue Georgische Lyrik, Corvinus Presse 2016, Germany.

Magdalena Nowakowska is a translator of Georgian, cultural manager, and promoter of Georgian culture. She has translated works by a number of contemporary Georgian writers, including Adibas by Zaza Burchuladze, Załzawione okulary by Gogi Gvakharia, and Ptaki i ludzie by Archil Kikodze.