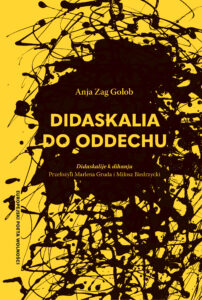 Poetry can be a book of scripts and possible situations that seem to be more real and poignant – through the power of metaphor – than so-called facts. Anja Zag Golob’s poems show us that if any truth exists, it most certainly has its counterpart, a mirror image. If we acknowledge oxymoron as the most mystical of poetic figures, the Slovenian author does her best to deconstruct and demystify this notion, breaking the mysterious unity of contradictions into a universe of equally worthy answers. Why? To make us realize that our choices, decisions and ideas are always a step behind the ever-changing world. And we, carried by a rapid stream of life, equipped with nothing but the tiny oars of language, can only correct our positions or smash against the rocks.

Anja Zag Golob (born 1976) is a poet, translator, journalist and cofounder, as well as editor of VigeVageKnjige publishing house, which specialises in comic books and graphic novels. She regularly writes for a Slovenian daily newspapers Večer and is the co-author of Studio City, a programme aired on public television. She also occasionally works as a dramatist for theatre and dance performances. Golob has published four books of poetry in Slovenian and one in German (with Nikolai Vogel). Her poems have been translated into English, Bulgarian, Czech, French, Spanish, Macedonian, German, Polish, Rhaeto-Romance, and Serbian. She has won the Slovenian Jenko Award twice, and received the Slovenian Literary Critics Society Award. She studied philosophy and comparative literature at the University of Ljubljana. She lives and works in Ljubljana and Brussels.

Marlena Gruda is a translator and literary scholar employed at the Institute of Slavic Philology of the Jagiellonian University. She translated works of the Slovenian poet Milan Dekleva and writers Evald Flisar, Miha Mazzini and Jasmin B. Frelih.

Miłosz Biedrzycki writes poetry and translates of Slovenian and English literature. He has recently published his translation of Tomaž Šalamun’s book of poetry Błękitna wieża [“Azure Tower”] (2019, with Rafał Wawrzyńczyk).