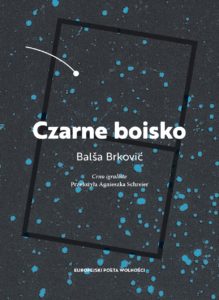 The black pitch of the 20th century is where the poet and the footballer face each other, because – according to Brković – only poetry and football still make life worth living. Both players are trying to score. Yet even though the pitch is black, light permeates the dark poems of the Montenegran writer, who wanted to make friends with the devil only to ultimately throw himself into the arms of love.

Balša Brković (b. 1966 in Titograd, today’s Podgorica) graduated in literature from the University of Belgrade’s Faculty of Philology. He wrote six books of poetry (Konji jedu breskve, 1985; Filip boje srebra, 1991; Rt Svete Marije, 1993; Contrapposto, 1998; Dvojenje, 2001; Crno igralište, 2017), a collection of short stories (Berlinski krug, 2008) and three novels Privatna galerija (2002), Paranoja u Podgorici (2010), and Plaža Imelde Markos (2013). Privatna galerija was translated into Czech (2007), Slovenian (2006) and Albanian (2007). Brković’s short story O Enropije Plamenac (translated by Will Firth) was published in an American anthology of the best European short stories of 2015. For his novel Privatna galerija, Brković received the “Mirosavljevo jevanđelje” award for the best prose book published in Serbia and Montenegro between 2001 and 2003. In 2002, it was also one of the four books shortlisted for the Meša Selimović award (for the best novel published in Bosnia and Herzegovina, Serbia, Croatia and Montenegro). In 2017, Brković’s poetry volume Crno igralište (Black pitch) received the Risto Ratković award for the best book of poetry published in Serbia, Bosnia and Herzegovina, Croatia and Montenegro. Balša Brković is also involved in theatre criticism, history and ideology of anarchism. For many years, he has worked as the editor of the culture column of Montenegrian newspaper Vijesti, and he originated the Saturday Art supplement. Agnieszka Schreier (b. 1978 in Gdynia) is a graduate of English Studies and Psychology, translator of English, French and South Slavic languages (Bosnian, Croatian, Montenegrin and Serbian). In 2017, her translation of Faruk Šehić’s Książka o Unie was shortlisted for the “Angelus” Central European Literary Award. She has also translated poems, including by Faruk Šehić.