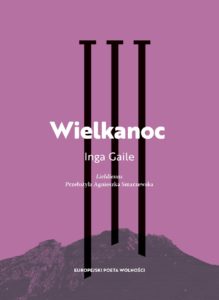 The author of „Lieldienas” demonstrates that the world can be built from scratch like a brick house, based on just about any set of words and associations. That our way of life is merely a matter of imagination. Poetry and life are an ocean of possibilities upon which we sail, and in which we drown. Inga Gaile’s poems teach us to shape our calves on our own.

Inga Gaile (b. 1976) is a poet, writer, translator, and playwright. She is the author of six books of poetry, including one of children’s poetry. She made her debut as a writer in 2016 with the novel Stikli (The Glass Shards), published in a series of historical novels We. Latvia. The 20th Century. In 2017, she published her first crime novel (Invisibles). In 2018, she plans to complete a collection of poems (Ways of milk). She has translated the oeuvre of Russian-speaking poets into Latvian. Her works, in turn, have been translated into English, German, Swedish, Lithuanian and Bengali. In 2017, a collection of Gaile’s translated poems was published in English as 30 Questions That People Don’t Ask (Pleiades Press, Missouri, USA) and in Spanish (Circulo de Poesia, Peru, Chile). Inga Gaile is the chair of the Latvian PEN Centre. She also organizes stand-up shows for women, and is herself a performer. Gaile received a number of important Latvian literary awards, including the Klāvs Elsberg award (1999) for her first book of poetry (Laiks bija iemīlējies, 1999), the Ojārs Vācietis award (twice: in 2004 and 2012) for the volumes raudāt nedrīkst smieties (2004) and Migla (2012), and the Latvian Literature Award (2015) for her children’s poetry volume Vai otrā grupa mani dzird? (2014). Agnieszka Smarzewska (b. 1987) is a translator, editor of Przegląd Bałtycki, author of short stories, and copywriter. She graduated in Baltic Studies from the University of Warsaw. Most of her texts have been published in literary magazines, such as Bluszcz, Borussia, Korespondencja z ojcem, Wizje, and Znad Wilii. So far, she has mostly translated Latvian interwar poetry into Polish (Aleksandrs Čaks, Austra Skujiņa). She lives in Warsaw.