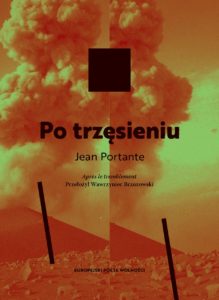 Aprés le tremblement [After The Earthquake]

Jean Portante’s poems were created in Jorge Luis Borges’s Library of Babel, where all books from the past, present and future enter into a dialogue with each other. On the one hand, this is symbolic, visionary and ‘inspired’ poetry, yet its main fuel is the language itself, the etymology and sound of words, their melody, which – to the poet – often equals meaning.

Jean Portante (b 1950 in Differdange, Luxembourg, where his parents emigrated from Italy) is the author of more than ten collections of poems, several novels and theatre plays, many of which have been translated into around 20 languages. He is also a translator of literature (mostly poetry) from several languages. He lives in Paris, but maintains close ties with Luxembourg, where he works as the artistic director of the Printemps des poètes poetry festival, literary editor of TRANSKRIT magazine and journalist for Jeudi weekly; he also lectures at the Institut national des langues. In France, he is a member of Académie Mallarmé and sits on the jury of many literary awards (Apollinaire, Mallarmé, Max–Pol Fouchet, Yvan Goll, etc.). Together with Claud Couffon, he is the head of the Cahiers latins series (publ. by Caractères). Portante, Jacques Darras and Jean–Yves Reuzeau founded the Inuits dans la jungle literary magazine. Portante has received the Prix Ruteboef, Prix Tony Bourg, Prix Servais (twice), Louis Montalo, and Batty Weber awards. In 2003, in France, he received the Grand Prix d’automne de la Société des gens de lettres for lifetime achievement and the Prix Mallarmé for his collection of poetry L’étrange langue. In 2011, he won the Luxembourg state award for lifetime achievement. He visited Poland several times, meeting with the readers (e.g., Czas Poetów – Poezja w czasie kryzysu, Lublin 2012, and Ars Cameralis, Katowice 2017).