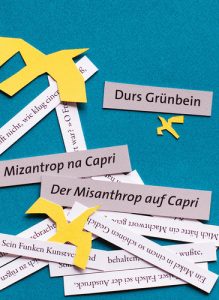 A dialogue with antiquity as a way of understanding one’s own experiences in the world at the turn of the 20th and 21st centuries, a vision of the “simultaneity of the unequal,” a return from the future to the primordiality of European culture, insomnia in the metropolis and meditations on Seneca, taken over from Juvenal, a reflection on power and the archaeology of everyday life, politics and eroticism, the struggle with the hard material of language and the marble of monuments – all this makes up poems in which the ancient Roman “anachronism” is a highly modern poetic tool, and the misanthrope on Capri of the title is not only the cruel Tiberius, but also a sarcastic exile: A poet traveling into the depths of history.

Born in 1962 in Dresden, the most prominent German poet of the middle generation and author of ten collections of poems (ancient poems in such collections as Nach den Satiren (199) and Erklärte Nacht (2002), several essayistic publications, translations of Aeschylus and Seneca. Winner of a number of prizes, including the Georg Büchner Prize (1995). In Poland famous mostly for his collection of essays Volcano and Poem (translated by Jakub Ekler, 2010) and presentations in the monthly “Literatura na Świecie” (1998, no. 3; 2011, no. 7-8). The Misanthrope on Capri (2005) is the first poetry book by Grünbein translated into Polish. He is currently living in Berlin.

Translator, author of poetry and essayist works, literature expert. Andrzej Kopacki was born in
1959. He is working at the University of Warsaw and for the monthly “Literatura na Świecie”. He has
translated works by Walter Benjamin, Gottfried Benn, Bertolt Brecht, Hans Magnus Enzensberger.
Received the Bosch Foundation Award (2000) and Mörike Promotional Award (2006).