Meet the poets from Lyon, Norwich, Barcelona and Antwerp. The authors could not come to Gdańsk for the European Poet of Freedom Festival because of the pandemic, but their poems and they themselves are here and present their recipe for poetry. Give it a try!

About the book
Though relatively small, the poetry collection of Samantha Barendson is a well-thought-over, complete project rooted in the profound experience of the loss. The “reconstruction of the father”, who passed away when she was two, takes the form of an almost theatrical string – or a metaphorical train – of poems which carry the daughter to the funeral of the one who preceded her. The landscapes she travels through merge with the landscapes of memory, filling the empty spaces of loss and making headway towards the terminus station – towards the final “Live”. 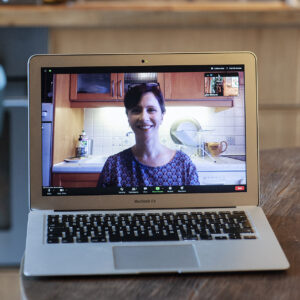 About the author
SAMANTHA BARENDSON is a French, Italian and Argentinian poet. She was born in 1976 in Spain, grew up in Argentina and Mexico and finally settled in France, in Lyons. Like herself, her writing travels from one language to another, and sometimes get mix in a creative reinvention. Author of poetry but also theater plays, she likes to work with other poets, painters, musicians, illustrators and photographers. Then she likes to declaim, perform, yell or sing her poetry on stage, a little frustrated for not being a Tango singer. She is an active member of the Collective: Le syndicat des po.tes qui vont mourir un jour [The union of poets who will die someday] whose purpose is to promote poetry for everyone and everywhere. In March 2015, she received the French poetry Ren. Leynaud award for her poetry book Le citronnier [The lemon tree].

About the translator
MARTA ELOY CICHOCKA – born 1973 in Cracow on the day of Jupiter, in the month of Leo, in the year of Ox, and to make matters worse, she is a numerological Three. Deported from Cuba, obtained her PhD in Paris, and a postdoctoral degree in Kraków. She can pride herself on individual photo exhibitions, two critical monographs, six books of poetry, numerous literary translations (i.a. works of Calderon translated into Polish, and Tkaczyszyn-Dycki into Spanish), and even the lyrics of some underground groups’ songs. Her work has been translated into French, Spanish, Russian and English. She translates from French and Spanish. She regularly neglects her personal website: eloy.pl.

About the book
One of the privileges of being a writer – and even more so of being a poet – is that of multiple identities. The poet can be somebody else in every poem – can create trial versions of oneself,  and send them into the world, into the hands of the readers – to watch them cope better or worse. Maarten Inghels enjoys that conglomerate nature of his identity so much that he has even established The International Society for the Official Doppelgängers of Maarten Inghels. He tells the reader of the proceedings of this entity, reporting from beyond the grave. Weird? Perhaps. But the poet presents – in a set of distorted mirrors – a world in which everyone can be whatever and whoever they want to be. He offers a Baudrillardian procession of simulacra, a hell of banality, a nightmare of arbitrariness and ambiguity. 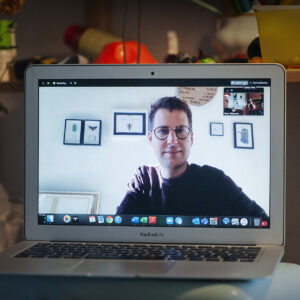 About the author
MAARTEN INGHELS (born in 1988) is a poet and writer. From 2016 till 2018 he was the official City Poet of Antwerp in Belgium. His latest book Contact connects poetry, visual arts and actions and received wide critical acclaim. His poems appeared as a tattoo for eleven people (Hunger) and were sown with vegetables (When we sow summer in each other). With Polling the People, he wrote a poem of 35 verses that poses an equal number of questions of the city’s inhabitants on their disposition, beliefs and culture. The poem with response form charted the city dweller’s identity and led to a correspondence with the community. He coordinated The Lonely Funeral in Belgium, a social and literary project which provides poets to speak at funerals of those without relatives and friends to attend. An eponymous anthology was published in Dutch, German (Edition Korrespondenzen) and English (Arc Publications).

About the translator
SŁAWOMIR PASZKIET He has graduated from Dutch Studies at the University of Wrocław, worked as the head of the Centre of Dutch Culture at the University of Wrocław, cultural and press attaché of the Embassy of the Netherlands in Warsaw, director of the Office of the Polish Chamber of Books and press spokesman of the Warsaw City Council. Currently, he is the director of the Maria Skłodowska-Curie Museum in Warsaw. A translator of Dutch literature, he has been promoting Dutch culture in Poland for years. He is a member of the Association of Literary Translators, where he takes actions to ensure the due status of translators. He has obtained his PhD at the UNESCO Chair for Translation Studies and Intercultural Communication of Jagiellonian University, and graduated from postgraduate course in Museum Studies at the University of Warsaw.

About the book
The heroine of Helen Ivory’s poems discovers the mysteries of her family home and casts at her relatives her poetic spells. The origin of these spells lies in a fairy-tale imagination, in a subconscious realm populated by creatures from the paintings of Hieronymus Bosch, or perhaps even in black magic. In Middle Ages, her metaphors could bring her to the stake. Today, when witches are capable of exorcising reality, she might have to pay the price of popularity. This is Ivory’s poetry: medieval stories against the boring, hypocrite bourgeois post-modernity. 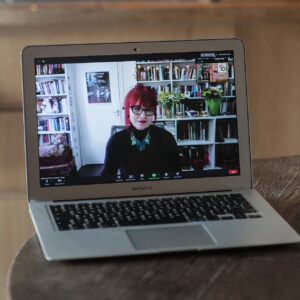 About the author
HELEN IVORY (born in 1969) – a poet and visual artist. She edits the webzine Ink Sweat and Tears and is tutor and Course Director for the UEA/National Centre for Writing online creative writing programme. She has won an Eric Gregory Award and her fifth Bloodaxe Books collection The Anatomical Venus was short-listed for the East Anglian Book Awards (2019) and won the East Anglian Writers ‘By the Cover’ Award (eaba 2019). The Anatomical Venus examines how women have been portrayed as ‘other’; as witches; as hysterics with wandering wombs and as beautiful corpses cast in wax, or on mortuary slabs in TV box sets. Fool’s World a collaborative Tarot with the artist Tom de Freston (Gatehouse Press) won the 2016 Saboteur Award for Best Collaborative Work. What the Moon Told Me, a book of collage/ mixed media/ acrylic painted poems was published in 2016 by Knives Forks and Spoons Press, and a chapbook Maps of the Abandoned City was published in January 2019 by SurVision. She lives in Norwich with her husband, the poet Martin Figura.

About the translator
Krystyna Dąbrowska (born in 1979) is a poet, essayist and translator. She graduated from the Graphics Department of the Academy of Fine Arts in Warsaw. Author of four poetry books: Biuro podróży (Travel Agency, Zielona Sowa, 2006), Białe krzesła (White Chairs, WBPiCAK, 2012), Czas i przesłona (Time and Aperture, Znak, 2014), Ścieżki dźwiękowe (Soundtracks, Wydawnictwo a5, 2018). In 2013 she won two of the most prestigious Polish literary prizes: the Wisława Szymborska Award and the Kościelski Award, and in 2019 – the Literary Award of the Capital City of Warsaw. Her poems have been translated into English, German (Austausch der Fenster, Edition Thanhäuser, 2018) , Italian (La faccia del mio vicino, Valigie Rosse 2017), Spanish, Portuguese, Russian, Swedish, Greek, French, Bulgarian, Macedonian, Croatian, Serbian, Lithuanian, Romanian and Chinese. They appear regularly in literary magazines in Poland and abroad, including Po&sie, Harper’s Magazine, Ploughshares, The Threepenny Review, The Southern Review, Modern Poetry in Translation, Revista Crátera, Akzente, Sinn und Form, and Manuskripte. Her translations include the poetry of W. C. Williams, W. B. Yeats, Thomas Hardy, Thom Gunn, Charles Simic, and Kim Moore, as well as selected letters of Elizabeth Bishop and Robert Lowell. She lives and works in Warsaw.

About the book
There are poets for whom literature is a timeless space, and all of its forms present fundamental human dilemmas in equally vivid and effective ways. Josep Pedrals is one of such poets. His rhymed, rhythmical poems resemble the works of medieval troubadours. Or is the Catalan poet just playing with conventions, testing our tolerance of pathos and historical patina? Even so, his poems invite reflection on the limits of artistic experimentation and of the cult of the avant-garde that modernity has so insistently promoted.

Download the book
Read the interview
Read the essay 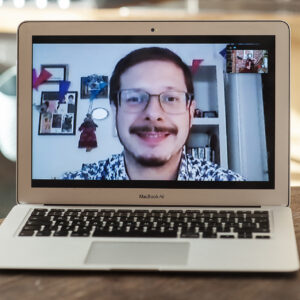 About the author
JOSEP PEDRALS was born in Barcelona in 1979. Since 1997, he brings his poetry to stages. He has performed throughout Europe, Asia and America, giving thousands of recitals in all kinds of festivals and cycles. He has been awarded invarious contestsof recitation, including the Osaka International Slam (2009). Not a good student (always against impositions), he left his Public Relations studies to be a good studious on poetry and literature. He works in poetry education for children and adults and gives lectures and courses on poetry, prosody and orality in schools, colleges and universities. He has developed poetry spaces on radio and television (now on Betev. – Barcelona TV) and has collaborated in art and culture sections of various publications (now on El País). He has published a sonnet every day in the newspaper Ara during a couple of years (2010–2012). He has coordinated, from 2002 to 2015, the HORINAL (Obrador de Recitacions I Noves Actituds Liter.ries – Workshop of Recitations and New Literary Attitudes) directing little poetry festivals and some poetry cycles around Catalonia. He has written several theatre plays, including Wamba va! (Mercat de les Flors, Barcelona, 2005), En comptes de la lletera (La Planeta, 2011), El furgatori (La Seca, 2012), Safari Pitarra (TNC, 2014), Fang i setge (Teatre Vict.ria, 2016). He was the keyboardist of the funky-pop band Explosion Bikini (1999–2004) and currently he leads the ironic popgroup Els Nens Eutr.fics. He was awarded with the “Lletra d’or” prize in 2013 (to the best catalan book) and the Time Out Barcelona – Best Artist of the Year 2014 prize.

About the translator
MARTA PAWŁOWSKA – She has graduated from Hispanic and Romance studies and obtained her PhD in Linguistics. She has been working as an assistant lecturer at the Institute of Romance Studies of the Jagiellonian University since 2011. She has translated the works of, among others, Joan Maragall, Santiago Rusiñol, and Juan Gelman. Her research interests also include Spanish and Catalan dialectology and the language and culture of Sephardi Jews. 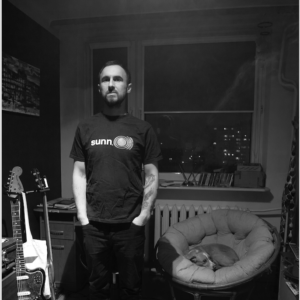 Artur Rumiński – guitarist of Furia, Thaw, ARRM, Mentor, and Gruzja bands. As a session guitarist he collaborated with Tides From Nebula band. Metal Hammer magazine has chosen him the musician of the year several times. With the Furia band, he performed music to the play Wesele  directed by Jan Klata in Teatr Stary in Kraków. 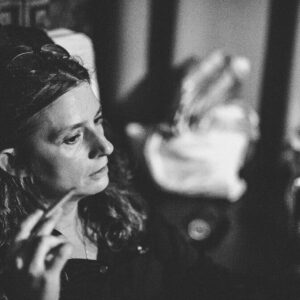 Versopolis is a literary platform devoted to poetry, founded in December 2014. Its goal is to support young European authors and promote their achievements beyond the borders of their home countries. The platform is formed by 23 literary festivals, including the European Poet of Freedom International Literature Festival, organized by the City Culture Institute in Gda